New York City stands among the world’s most iconic design hubs, and the Vessel is one of its latest architectural innovations. The Vessel was constructed as the centrepiece of Hudson Yards Public Square and Garden, which was first described as a city within a city. The publicly accessible structure was designed to welcome visitors to a popular district of Manhattan in a truly memorable fashion. For any architectural professional, being able to construct something spectacular that impacts the cultural community while inspiring the future of design is a dream come true. The Vessel achieves both.

To learn more about this architectural feat, let’s take a closer look at its inspiration and design.

What Is the Vessel?

As one of Manhattan’s newest monuments, opened in 2019, the Vessel was designed by Heatherwick Studio as the focal point of Hudson Yards—the largest private real estate development in American History. Hudson Yards transformed a rail yard in Manhattan into a brand new neighborhood, comprising offices, residences, retail outlets, and five acres of public spaces.

The Vessel, which stands center stage of the public square, is 150 feet tall and composed of 154 interconnecting flights of stairs. The structure also features 80 landings and a vertical climbing experience that extends for a mile.

Architectural technician students will be impressed with the intricate design of this spiral maze. Yet despite the palatial scale of the Vessel, its purpose is simple—primarily designed to be climbed and enjoyed by both locals and visitors.

Where Did the Inspiration Come From?

The vision behind the Vessel originated in the creation of a new space for people to connect in the heart of the district. Heatherwick Studio wanted to develop more than a static building for people to stop and stare at. It was about designing a community experience, and something that people would interact with socially.

Students of architecture training will be interested to learn that early designs drew inspiration from images of the stepwells in India, where people would gather to collect water. From there, ideas emerged about how to provide visitors with a sense of journey. That early vision was materialized in the creation of a vertical climbing structure, which merges utility with an active and immersive experience. The idea of developing a single object became a way of channeling different avenues and people into one collective, negating the idea of distinct objects scattered throughout the space. 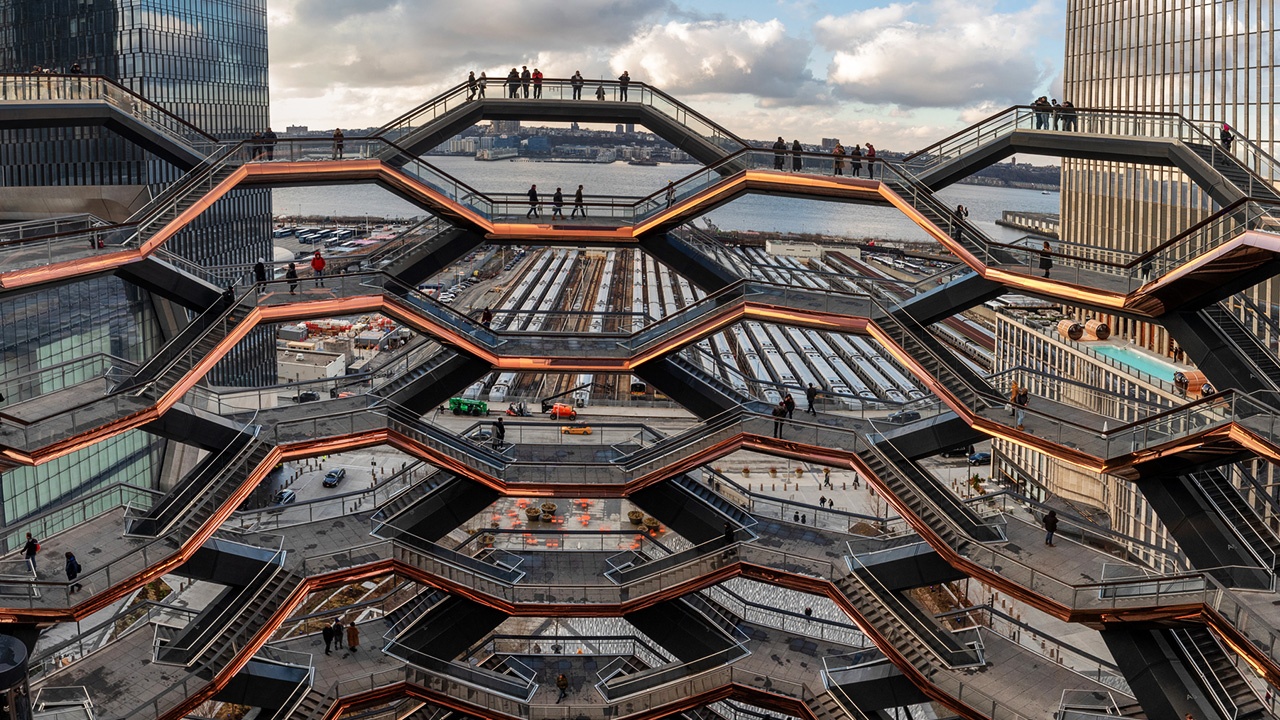 Architectural technician students should note the interactive space of the Vessel

Those in technical design programs should note the Vessel’s material palette, which merges reflective surfaces with more commonplace urban materials. The exposed steel frame of the structure and polished copper color adds to the industrial grandeur of the Vessel’s design while distinguishing it from the surrounding architecture.

Additionally, the three-dimensional lattice of the steps extends the public square vertically and opens up a mile of varied routes for people to explore. In this design, the Vessel resembles more of a bridge than a building and stays true to the creative vision of a space for people to connect both physically and socially.

Join the Community, Design a Brighter Future. Meet with Admissions.